Understand how compasses work - and how they malfunction! A great way to learn about magnetism, magnetic materials and the Earth’s magnetic field.

Compass
An instrument used for navigation. It has an arrow which, in general, orients itself to always point North.

Bar Magnet
A bar shaped metal object which has North and South magnetic poles and an associated magnetic field around it.

Magnetic Material
A material that can be magnetised by a magnet (eg. iron).

Magnetic Field
The area around a magnet where magnetic materials experience a magnetic force. The field is oriented from the North pole of the magnet to the South pole.

Magnetic Field Strength
A way of quantifying the intensity of a given magnetic field. The greater the strength, the more intense the field. Measured in A/m.

Permanent Magnet
An object which retains its magnetic field.

Induced Magnet
A magnetic material which has been given a temporary magnetic field by aligning the magnetic parts of the material in a north-south direction. This is done using another magnetic field.

Earth’s Magnetic Field
The Earth has a weak magnetic field surrounding it. It is as if there is a bar magnet in the core of the Earth.

Step 1
Turn the glass upside down.
Step 2
Place the skewer on the bottom of the glass, making sure that one end of the skewer overhangs the edge of the glass. Tape the skewer to the glass.
Step 3
If the magnet does not have its North and South poles clearly marked, place a small piece of tape on one end as a marker, so you can tell the ends apart.
Step 4
Tie one end of the string around the middle of the magnet and tie the other end to the overhanging end of the skewer. The magnet should be suspended from the skewer. Ensure that there is enough space for your to write beneath the magnet. This is your compass.
Step 5
Place the compass on a sheet of graph paper. Make sure that the magnet and the glass are both within the area of the paper.
Step 6
Use the pencil to draw around the glass, marking its position.
Step 7
Turn the glass so that the magnet is close to the edge of the paper. Keep the glass on its marking.
Step 8
Draw an arrow pointing in the direction of the skewer. To do so, make a small mark at the base of the glass, directly below the skewer. Then make another mark beneath the end of the skewer. Join the two marks to finish the arrow.
Step 9
Once the bar magnet stops moving, draw an arrow on the paper showing its direction.
Step 10
Keeping the paper in the same position, rotate the glass so that the skewer faces a different direction. Ensure the glass remains on its marking.
Step 11
Repeat steps 8 – 10 until you have four or five pairs of arrows.
Step 12
What do you notice about the direction of the magnet?
Step 13
Untie the magnet from the string. Place the magnet beneath the plain paper and slowly pour some iron filings over the top of the sheet. Observe what happens.

Instead of a barbecue skewer, a wooden chopstick can be used.

Wash hands thoroughly after handling the iron filings. Do not inhale or ingest the filings.

The skewer has a pointed end, so handle with care. Keep your face away from the point when marking the directions. A small piece of polystyrene or sponge could be used to cover the point, especially if working with children of a young age.

Imagine you’re out hiking in the hills. You have a map and you know the direction you have to walk in. However, it’s a rainy, misty day and you can’t really see where you’re going. What item should you have brought with you to make sure you’re walking in the right direction? (Answer: Compass)

We use compasses to know the direction of North, South, East and West. A compass has a little magnet which always turns to face the same direction; a compass arrow should always point North. Why?

Every magnet has a North pole and a South pole. Opposite poles attract – so a North pole would attract South pole. It’s kind of like how peanut butter and jam just go together, even though one is salty and the other is sweet. Similar poles, on the other hand, repel each other. Kind of like how you might think twice before adding extra salt to a packet of crisps – the result would probably be disgusting.

Why does the magnet always face the same direction?
It aligns with the Earth’s magnetic field.

Why was the glass rotated?
To show that no matter the original direction of the magnet, it will always align.

Why do the glass, skewer or paper not attract the magnet?
They do not have a magnetic field.

Why do the iron filings form ‘lines’?
They align with the magnetic field lines.

Why is iron attracted to the magnet?
Iron is a ferromagnetic material.

Why is iron not attracted to one pole and repelled by the other?
Magnetism is induced in an iron filing such that it is attracted to the nearest pole.

What do you think would happen if we placed the compass near a very strong magnet or large piece of iron?
Compass would interact with these materials.

What would happen to compasses if the Earth’s magnetic field were to flip?
The compass needle would point in the opposite direction. So compasses would need to be re-labelled.

Magnets have a magnetic field about them, which exerts a magnetic force on magnetic materials (like iron) which enter the field. The magnetic field travels from the North pole of the magnet to the South pole. When two magnets are placed near each other, opposite poles attract and similar poles repel.

The Earth has a weak magnetic field. The South pole of the Earth’s magnetic field is found near to geographic North, while the North pole is found near to geographic South. The poles are not exactly aligned with the geographical poles – there is an angle of variation between them. Approximately once every 100, 000 years, the Earth’s magnetic field flips. It is believed that the Earth is nearing such a flip. If this were to occur, then compasses would have to be re-labeled.
Sixth Form College Physics, A.C. Xuereb
http://www.sciencemag.org/news/sifter/time-new-compass-earth-s-magnetic-field-may-be-slowly-flipping

Permanent magnets (like the one used in this experiment) can induce magnetism in magnetic materials like steel or iron. When either of these materials is moved into the field of the magnet, induced magnetism converts the material to a temporary magnet. The induced field is such that material is attracted to the magnet. So if an iron bar is placed near the North pole of a magnet, a South pole will be induced at the end of the bar closest to the magnet and a North will be induced at the other end of the bar, further from the magnet. Thus, the magnetic material is attracted to the permanent magnet. When the material is moved away from the magnet’s field, it becomes demagnetized. This induced magnetism occurs at an atomic level within the atoms of the material.
Complete Physics by Stephen Pople
http://www.rpi.edu/dept/phys/ScIT/InformationStorage/faraday/magnetism_a.html

Compasses have been used for centuries for navigation and orientation. These magnetic devices indicate the cardinal directions: North, South, East and West by aligning with the Earth’s magnetic field. They are used by hikers, divers and adventurers. Sophisticated compasses are found in sailing boats and aircraft.

Permanent magnets used in computers, mobile phones, headphones, speakers, certain motors and MRI machines are made from rare earth metals. These rare materials are mainly sourced in China. Research in Europe has been focused on mining these elements, finding substitutes and in particular, finding environmentally friendly ways to recycle these magnets from devices which have been thrown away. Recycling oriented research is focused on extracting the materials from old devices and processing them so new magnets can be made.

Carry out the experiment very close to the front of a fridge. What do you notice? (The fridge door acts as a large and relatively powerful temporary magnet which will attract the bar magnet. The magnet will cease to align with the Earth’s field).

When using iron filings to observe the field lines, place a second magnet under the paper, close to the first but not so close that they attract each other, and then pour the iron filings over the top of the paper. Observe how the field lines of each of the magnets interact. 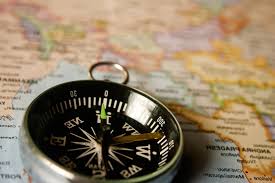 Use a compass (Intermediate)

Padfield, N., & Styles, C. (2019, November 12). Compasses: How do they work?. Retrieved from http://steamexperiments.com/experiment/compasses-how-do-they-work/

What are electromagnets and why do we use them? Discover the physics of electromagnetism by turning a nail into a magnet using simple, household materials.