Freeze water instantly by sharply knocking a bottle of supercooled liquid water. It may look like magic, but there's some pretty cool science behind it.

Understand how the process of supercooling works and why some liquids do not freeze when cooled below their freezing point.
Understand the concept of latent heat of fusion.
Introduction to the concept of ice being formed by a lattice structure of water molecules.

Crystallisation
The formation of a solid in which the molecules form a highly organised and symmetric structures called crystals.

Water without any impurities. Impurities are removed from the water through a process known as distillation.

Refers to the energy released or absorbed by a thermodynamic system at a constant temperature.

An initial crystal that allows for the continued process of crystallization.

A liquid with a temperature below its freezing point but which is still in the liquid state.

Step 1
Fill two plastic water bottles with distilled water and refrigerate them overnight. Although only two water bottles are used in the experiment, placing extra bottles of water in the fridge is advisable so that the experiment can be attempted multiple times.

Fill the container with ice.

Submerge two refrigerated plastic water bottles in the ice, making sure all surfaces of the bottles are in contact with the ice.

Generously sprinkle rock salt all over the ice.

Insert a thermometer between the bottle and the ice in order to monitor the temperature of the bottle.

After the water has been at -8oC for 10 minutes, remove the bottle from the container, and note that it is still in liquid state. Strike the bottle sharply against a table and observe what happens.

Try pouring the supercooled water onto an ice-cube and see how high an ice tower you can create.

The bottles used should be made of plastic, not glass. Striking a glass bottle on a table may cause it to break and produce a health hazard.

You and a friend are hanging out on a hot day and you decide to play a prank on them. Offering your friend a bottle of water you reach into an ice bath and pull out a strangely cold bottle of water. As you are about to hand it to them you ask them if they wanted ice with their water, then strike the bottle against a hard surface. The water seems to instantly freeze right before your eye. “How did you do that?” Your friend asks, amazed!

A little bit of advice:

It is very difficult to get this experiment to work correctly the first time around and that is why this demonstration is not ideal for festivals. This experiment is impressive, but it is highly sensitive to small changes in variables, so the result can be very much hit-or-miss. To increase the likelihood of success, during the demonstration, document the amounts of ice and salt used, and take measurements of the time that bottles are submerged in the ice and salt. This can help you to keep track of the experimental conditions and if the experiment is a failure, these recordings can help you avoid repeating the mistake by changing some experimental variables, for example by increasing the amount of salt used or the time of submersion.

For how long does the water need to be supercooled?
If the water is already refrigerated, it should be kept in ice for at least 10 minutes.

Why is it so difficult to get the experiment right the first time around?
The success of the experiment depends on many variables; such as temperature, and the proportions of ice and salt. Small changes in these variables can lead to success or failure.

Does it only work with pure water?
No, but other factors need to be considered in that case, for example the water may need to be cooled to a higher or lower temperature.

Why is the salt added to the ice?

To decrease the temperature of the ice below 0oC.

Why use distilled water?

For ice to form as the water cools, the initial ice crystals need an object on which to grow around. In normal water, ice usually grows on microscopic impurities found in the water, however, if distilled (or very pure) water is used, it contains no such impurities. Thus, the water can be cooled below its freezing point of 0oC without actually freezing and remaining as a liquid, in a process known as supercooling. Striking the bottle against a hard surface (such as the table) makes it more likely that some of the molecules in the water move together to form a crystal structure. Once a few of the molecules join together, the crystal can grow around them. Thus, the molecules quickly join together, and the crystal structure spreads throughout, causing the water in the bottle to freeze almost instantly.
(https://www.stevespanglerscience.com/lab/experiments/instant-freeze-soda-ice/)

The theoretical freezing point of water is 0oC, when water is cooled below this temperature, it can be expected to change state from a liquid to a solid, ice. However, in this experiment the distilled water was supercooled: its temperature was lowered below 0oC, but it remained a liquid until it was struck on a hard surface.

Heat energy plays a key role in changes of state. In the transition from solid to liquid, for example from ice to water, heat energy needs to be provided in order to break the crystal lattice in the ice. In order for a liquid to transition to a solid, it must lose heat energy through the cooling process. However, simply cooling a liquid is not enough for water molecules to arrange themselves into solid crystals, extra energy must be provided to initiate the process of crystallisation, known as the latent heat of fusion. As soon as this energy has been provided and a small crystal is formed in the liquid, the rest of the molecules in the liquid quickly rearrange themselves into a crystal structure and the water freezes to a solid. The small crystal which triggers the crystallization process is called a seed crystal. In the case of this experiment, the latent heat of fusion is provided by striking the bottle against a table. This latent heat energy is enough for the water molecules to group and form at least one seed crystal.

Heat packs are used to warm parts of the body in order to relieve pain. Some heat packs use chemical reactions that release thermal energy i.e. exothermic reaction. In some packs, supersaturated sodium acetate is heated until it melts into a liquid. As it cools it remains as a liquid until a nucleation site is created, and then the sudden crystallization of the sodium acetate releases thermal energy.
(http://materiability.com/portfolio/latent-heat-storage/)

The concept of latent is being implemented in novel ways to improve the efficiency of heat pumps.
https://cordis.europa.eu/project/rcn/15596_en.html

Experiment with different types of water (for example tap water or flavoured water) and observe the behaviour of the water as it freezes.
https://www.stevespanglerscience.com/lab/experiments/instant-freeze-soda-ice/

Investigate the effects of cooling the distilled water to different temperatures below 0oC. 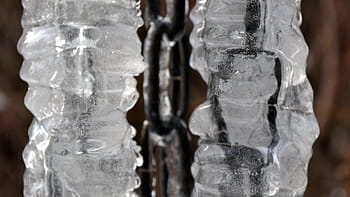 Measuring the Latent Heat of Fusion of Ice
(Intermediate)

This work is licensed under a Creative Commons Attribution-NonCommercial-ShareAlike 4.0 International License
2 1
Subscribe Now
Give us Feedback
[caldera_form id="CF59c90c0240779"]